Bred to resemble the endangered big cats, Toygers share the fierce looks with the wild felines, but their sweet, gentle nature has nothing to do with the wildness of tigers who were the inspiration for this cat breed.

Toygers, which is short for toy tigers, are a cross between a Bengal cat and a striped domestic cat, which is the reason for their combination of great, loving personality and killer looks.

Two unique spots on the temple of Judy Sudgen’s Bengal cat are the reason Toygers exist today. When the feline enthusiast and breeder noticed the unusual, round markings on her Bengal’s head, it sparked the idea to develop a breed that closely resembles one of the jungle’s most stunning creatures- tigers. She decided to breed her beloved Bengal with a domestic cat that had prominent stripes on her coat in order to get a cat that has a coat with bold stripes. More than two decades later, Toygers are now a pedigree cat breed cherished for their tiger-like appearance and friendly, playful temperament.

The largest of the big cats, tigers are renowned for their majestic looks. Unfortunately, it’s precisely their beauty what led to these gorgeous felines being on the verge of extinction. According to the latest statistics, there are less than 4,000 tigers left living in the wild. Their most distinct feature, orange pelt striped with black, is also the main reason why there are so few of them left, as the poachers hunted them down mostly because of their fur.

In the 1980s, Judy Sudgen (Jean Mill‘s daughter), a cat breeder from the United States, decided to create a domestic cat that would both look like the endangered species and help conserve it at the same time. Her goal was to raise awareness about the near extinction of tigers and to allow people to have a miniature version of tigers they could admire and love up close. One of the main reasons why the price for a Toyger kitten can go up to $5,000 is that most breeders give a part of the money to foundations dedicated to the conservation of tigers.

The first couple of cats in this breeding program were Judy’s own Bengal cat, called Millwood Rumpled Spotskin and a striped domestic cat, Scrapmetal. As her own mother was the breeder that developed the Bengal breed, Judy had more than enough experience with designer cats. To ensure the exotic tiger look would be as authentic as possible, she even imported a male street cat from India, who had prominent spots on his temple, like her own Bengal. The result of this ambitious breeding program is the Toyger breed we know and love today, with a rusty colored coat, vivid black stripes and a great personality to boot.

As a cross between a playful, hyper-intelligent and affectionate Bengal and a curious, docile domestic cat, the Toyger has a balanced mix of traits from both breeds. Maybe the best way to describe the temperament of the Toyger is to say it’s a combination of the unique personality of Bengals, with an added bonus of friendliness and carefree nature of the domestic cats.

Although Toygers are connected to the Asian leopard cat only through Bengal cats in their lineage, they still inherited this wild cat’s love for water. Same as the Bengal cats, Toygers love playing in the water, so don’t be surprised if you notice this exotic cat lurking around the sink or fishing for imaginary prey in their water bowl.

Smart and curious, Toyger cats can learn tricks easily and love interacting with their humans. They can walk on the leash, play fetch and generally respond great to positive reinforcement training. As they are very energetic and playful as well, expect your tiny tiger to prowl around your apartment, tops of the cupboards and hidden nooks and crannies included!

Their sharp minds and active temperament are credited to Bengal cats. However, the main difference between a Bengal and a Toyger, apart from their looks, is their level of friendliness. Although Bengal cats are loving and affectionate, Toygers take this to a whole another level. Not only they get easily attached to their family members, they display their gentle side to any human. They are not distrustful or overly cautious when they meet strangers, and they’re always affectionate, purring and willing to cuddle. This also means that Toygers can be a bit needy. These striped felines enjoy human companionship and they’re not afraid to show it, so expect loud meowing if your kitty feels like they’re being ignored, as well as being constantly followed wherever you go. As their name suggests, Toygers are the breed closest to the trademark tiger looks amongst all domestic cats. Although many people assume it’s just about their stripes, this breed is still being developed to resemble real life tigers as much as possible.

The only allowed markings of the Toyger breed are the dark, bold stripes, spread out in a random pattern against a backdrop of reddish-brown hair. Unlike the vertical stripes on the body, the markings on their head are distinctly circular, same as the tigers of the wild. Apart from having unique markings, their coat is incredibly smooth and, although dense, quite short. The quality of their pelt-like, sleek coat is a trait the breed inherited from the Bengal.

Even though the coat of the Toyger is the feature that people associate the most with the tiger, these cats have a few more typical tiger qualities that might not be apparent at the first glance. Toyger’s legs are much shorter than Bengal’s, for example, giving this feline a rolling gait, characteristic to big cats. When a Toyger strolls around your home, it’s like looking a tiger on the prowl! Even their toes are elongated, and their paws resemble the ones of a tiger, although, unlike the tiger’s, they can’t rip you to shreds.

Although the Asian Leopard Cat is just a far relative in the lineage of most Bengal cats, they do have this small wild cat to thank both for their looks and their unique personality. Considering that the Toygers are a cross between a Bengal cat and a domestic cat, it’s only natural that they share many traits with their parent breeds, particularly the leopard-like feline.

When it comes to the looks, both cats look like tiny wild cats, the only difference being that the Bengal cats have spotted fur, whereas the Toyger boasts vertical stripes. The quality of their coats is very similar, with both breeds having plush, velvety hair that has a beautiful sheen to it. And, of course, unlike the Bengal, which comes in different colors and two approved markings, the Toyger only has one standard appearance.

As far as the personalities of these two exotic breeds go, they’re much more similar than different. Both the Bengals and the Toygers are playful, intelligent and energetic, and they love to be included in the activities of their families. However, breeders tend to emphasize that Toygers are much more docile and gentle than the Bengals, but many people mistakenly presume that this means that Bengals are more wild, which is not the case. This misconception probably stems from the fact that, when the Toyger was first created, the Bengal cats were a fairly new breed themselves, and since they were early generation Bengals, people often associated the breed with their close wild cat ancestors. After all, it’s only a different manner of expressing the love and affection that sets these two felines apart. The Bengals tend to focus on one human, forming a strong bond, and displaying their emotional side only to few privileged people. On the other hand, Toygers are much more carefree and open, and they will treat even strangers as their best friend. They shower everyone with affection and are generally much more friendly.

When all is said and done, if you’ve always dreamed of having your own tiger, Toyger is the cat you’ll fall for. But, make sure to base your decisions on adopting or buying a kitten not only on their appearance but their personality as well. Toygers have big personalities, high levels of energy and demand being in the center of the attention. If you’re hoping for a cat that is laid back and spends most of their days sleeping, then, despite how gorgeous you think the Toyger is, it might not be the right feline for you.

A proud mama to 8 cats and 7 dogs, Angela spend her days writing and pampering her pets, all of whom were rescued from the street. When she’s not gushing over her adorable cats or playing with her dogs, she can be found curled up with a good fantasy book.
Previous Amazing GoPro Video Captures This Bengal’s Skimboarding Skills
Next This Guy Gave His Cats An iPad To Play With And It Was Hilarious 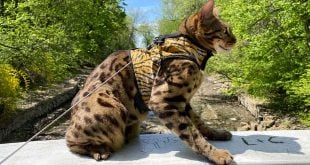 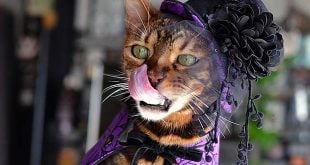 0 0 vote Article Rating Do you dress your cat up for Halloween? Not all …